Falcons are Back! Preseason Game #1 Recap Falcons fall to Dolphins 20-23

After 185 days since Super Bowl 51 and the collapse of the Atlanta Falcons, the Brotherhood turned all their hate and frustration to the offseason where they focused on getting 1% better everyday. On what Falcons fans are calling a “Redemption Tour”, the Falcons finally returned to the field on August 10th against the Miami Dolphins for Preseason Game #1. 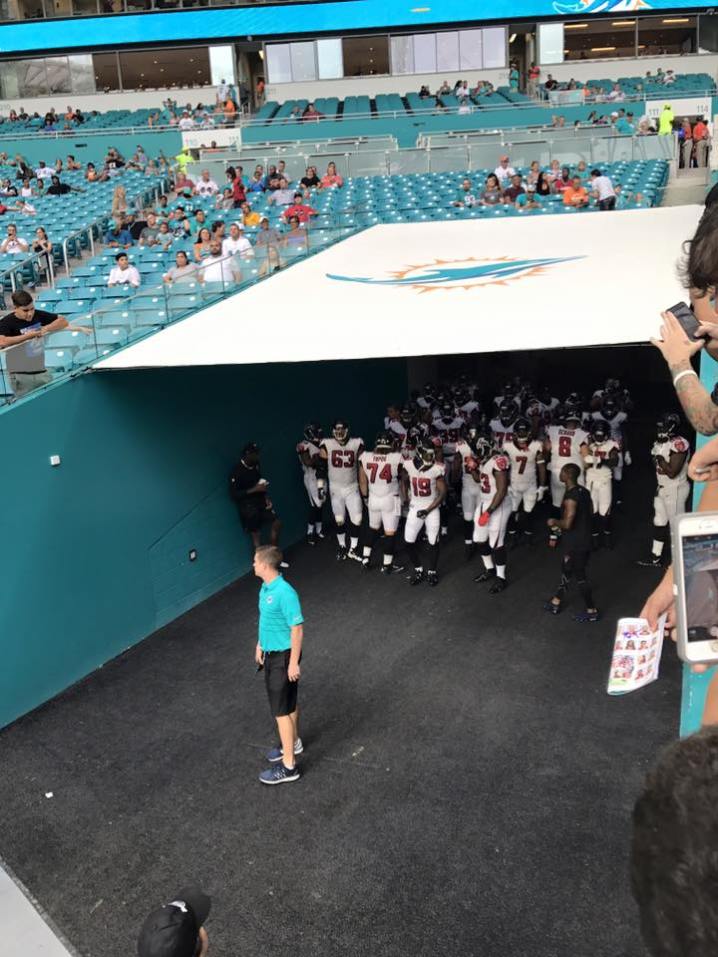 With Julio Jones, Taylor Gabriel and Taakarist McKinley ruled out while trying to come back from injuries, the Falcons sent out Matt Ryan, Devonta Freeman, and Mohamed Sanu to get the preseason started and they didn’t disappoint! After the 1st team defense forced a 3 and out, the offense took over on the Dolphins 36 yard line.

Being that it was the 1st game for new OC Steve Sarkisian, the Falcons were thought to possibly take a step back offensively but that was far from the truth. With the first play of the game, Sarkisian called a roll out play for Matt Ryan to connect with 2nd year TE Austin Hooper for 12 yards. Followed by 2 basic HB Draw plays for Devonta Freeman and Tevin Coleman for a total of 4 yards and a 5 yard completion to Mohamed Sanu, placed the Falcons with a 4th and 1 on the Dolphins 16 yard line. Sarkisian made it known that he was willing and able to call the plays needed to make the Falcons offense dangerous, when he gave the ok to Matt Ryan to throw a HB screen to Devonta Freeman who caught and ran 15 yards for a TD giving them a 7-0 lead.

After that drive, Coach Dan Quinn threw the 2nd team on the field so that they could get more reps in. The offense then became stagnant but had sparks of explosive plays when rookie, Reggie Davis (product of UGA), made 2 catches for 43 total yards. On the defensive side of the ball, the players who shined the most after only a limited amount of snaps were Deion Jones and Jarnor Jones (product of Iowa State). Deion was given 8 snaps and 5 of those snaps were runs where he collected 3 solo tackles and showed he is a force to be reckoned with in the trenches. Janor had 2 pass deflections and an interception in his NFL Debut. Both players look to make an impact whether it be as a role player or a starter.

For most of the night, the Falcons had their 3rd string QB, Matt Simms on the field taking a bulk of the snaps who was unable to really do anything offensively to pull the Falcons to a big lead. The Dolphins wouldn’t go away and ultimately sealed their victory with a 99 yard TD pass to rookie Damore’ea Stringfellow (product of Ole Miss), who broke two tackles and raced to the endzone giving the Dolphins all the lead they needed.

Coach Quinn said in a press conference following the game that there were multiple good parts in the first half but not too many in the 2nd. He also stated that now they have some film so they know what they can work on leading up to Preseason Game #2 against the Pittsburgh Steelers on August 20th.