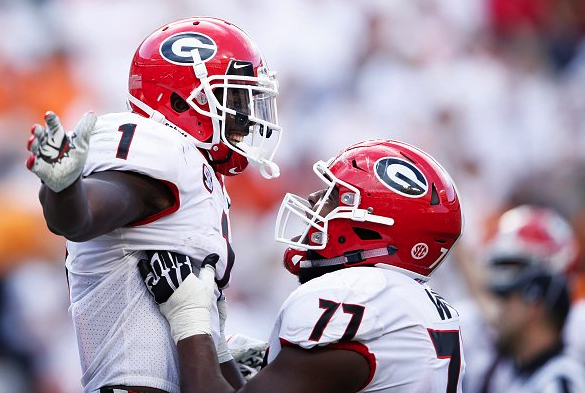 As many Georgia fans can remember, last year in July, Sony Michel broke his forearm and underwent surgery. With the season starting 2 months later, Sony was never really able to get in a groove and punish defenses with his running game.

Throughout the 2016 season, Sony being known for his explosive check down plays in the receiving game, wasn’t himself which put more pressure on the freshman QB Jacob Eason to force passes down the field.

With a noticeable drop in production in the running game, Sony only had 4 rushing TD’s, compared to the 8 TD’s that he racked up in 2015.

With Sony looking like a completely different running back in 2017, his numbers have skyrocketed and has helped keep UGA undefeated through 6 games this season. Sony’s 59 rushing attempts for 406 yards and 4 TD’s has already matched his TD total from last year. Along with his teammate Nick Chubb (91 rushing attempts for 618 yards and 8 TD’s), the running back unit has destroyed defenses at a significant rate. With Sony coming on strong and his ability to compliment Nick Chubb, defenses now have another running back they must prepare for on a weekly basis.

With Georgia sitting at #6 in the Nation in rushing yards at 1610 through 6 games, look for the Bulldogs to continue to feed their workhorses and rack up rushing TD’s.