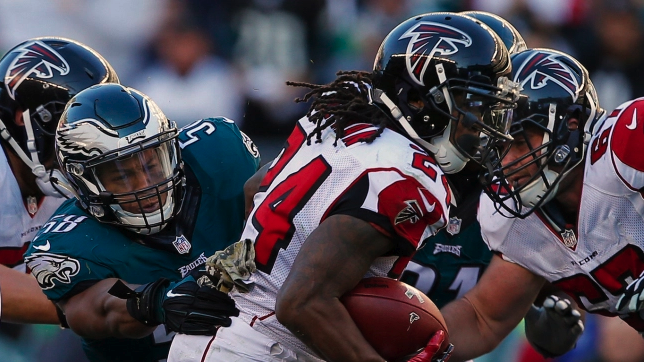 After overpowering the Rams in LA for the Wild Card victory, the Falcons now look ahead to their divisional matchup with the #1 seeded Philadelphia Eagles.

In the last meeting with the Eagles in 2016, the Atlanta Falcons left defeated after a 24-15 loss. In a game that was won by Eagles star player, Ryan Matthews who had 19 carries for 109 yards and 2 TD’s. After the Eagles have won 3-4 meetings at home, the Falcons will need to Rise Up and win an important away game on their path to the Super Bowl!

Keys to Victory for ATL:

Philadelphia Eagles known for having a good core of running backs and some decent WR’s, the Falcons will need to rely on their defense to step up in a big way and stop the game changing plays. With Eagles’ RB Blount receiving the bulk of the carries, averaging  4.4 yards a carry, he will be rotating with backup Jay Ajayi. With the Eagles a pass first offense with 38 total TD’s compared to 9 rushing TD’s, the Falcons secondary will be challenged. Stay on Zach Ertz and Alshon Jeffery

With the defense coming up big in the past few games, they will need to continue that trend and make the Eagles a one-dimensional team. With star QB, Carson Wentz out of the year with injury, the backup Nick Foles has stepped in and had some difficulty with moving the ball down the field. If the Falcons D is able to pressure Foles and get him on the ground early, he will need to throw the ball rushed and could lead to turnovers.

After not finding the end-zone all year, Julio Jones was finally able to catch a TD in the red-zone last week! This is going to be key in order to spark this very dangerous Falcons offense. Julio Jones the most gifted WR in the league will need to step up and make this his game.

Feed the ball to Coleman and Freeman. As each week becomes more and more important, it is ideal that the Falcons keep their offense balanced. In doing so, they must hand the ball off to their two RB’s who have the ability to break tackles and get good gains on the ground.

Defensively for Atlanta they need to cause turnovers and disrupt Nick Foles in the pocket. With Deion Jones looking like an obvious Pro-Bowler, he will lead this defense on stopping the #1 seeded Eagles and push his team to the NFC Conference Championship!