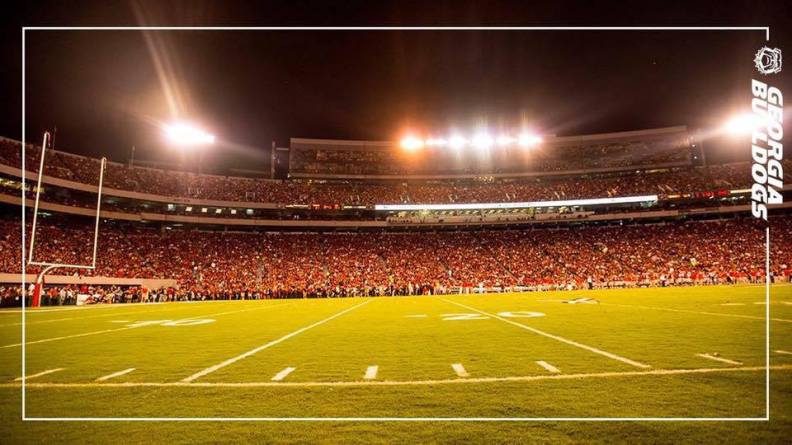 After roughly 33 weeks since their heartbreak loss in the Benz for the National Championship, the Dawgs return home to Sanford Stadium to “Tee it up Between the Hedges.” Their first opponent… Austin Peay Governors…as most believe, it shouldn’t be close. With a 3:30pm start time, the Bulldogs have a few keys to victory:

Don’t let the moment be to big for you:

With the Bulldogs coming off their first National Championship appearance since 1980, the Dawgs head back home to face probably the most hyped fan base in College Football. With many projecting a sold out game with 92,000 on Sept 1st, the Dawgs need to make sure the atmosphere doesn’t distract them from overlooking their opponent.

Get everyone some reps:

With this game thought to not be close, Coach Smart and company need to work in as many different formations and players as possible to get everyone some experience, as they will need it as they get deeper in the season. With Smart bringing in the #1 recruiting class, the expectations are at an all time high.

In Kirby Smart’s 3rd year as the HC, the Bulldogs need to figure out their identity. Last year it was evident that the defense was their backbone led by LB Roquan Smith. Now that Roquan is no longer at UGA, the team needs to figure out who are going to be the leaders. With the offense stacked, who will step it into that leadership role… will it be Fromm, Hardman, Godwin, Swift or Nauta or will it be Deandre Baker and Jonathan Ledbetter on the defensive line?

Although UGA looks to have one of the best WR cores in the Nation, they must remain loyal to the run. The bread and butter of Georgia Football is the running attack. If they are able to hit the season running, they will be able to solidify the run and open up passing lanes for Fromm.

Get the #1 player, Justin Fields on the field! Let him get some reps and see what he can do with not only his arm but also his legs. The Dawgs need to spread out the defense and see what they have in their WR’s. Everyone knows what we have in Godwin, Hardman and Nauta but Dawg Nation and analysts are excited to see what Riley Ridley does in his sophomore season, how Cal transfer, Demetrius Robertson fits in the scheme, and what the 6’5” freshman, Tommy Bush can bring to the table.

If Georgia is able to accomplish these keys to victory, they should win easily.