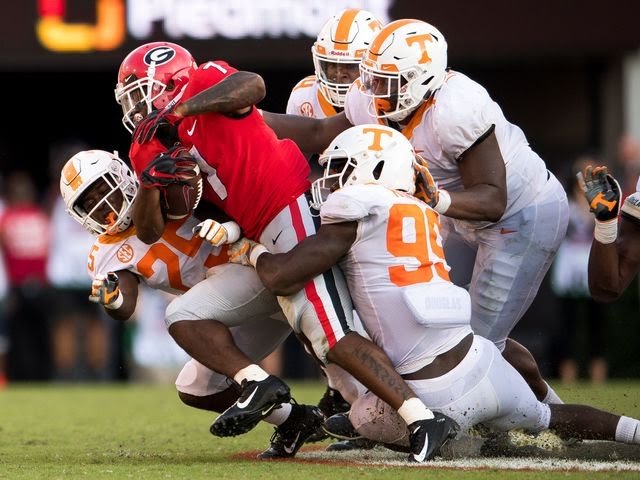 First offensive drive:
3 plays of unblocked blitzers straight into back field. First play: TE doesn’t make a chip block on DE leading to a free rusher who nails Fromm as he releases the ball (completion for 8-ish yards). Run plays ensue to gather together, getting first downs. Run blocking good allowing us to pound between the tackles. Later, 2 wide, 2 te and 1 rb set – pass to Swift after unblocked blitzer forces Fromm to go to safety pass – gets first down. Run play, then an overthrow of Ridley to stretch the field – Ridley did a small cut when breaking between the safety and CB, could have been part of play or a mistake that messed up pass timing. Next play, 2 free blitzers into the pocket, DE forced fumble and Nauta picks it up and scores. Short version: tons of pressure on Fromm – not much help pass protection but fairly good on the run.

Offensive drive two:
First play is three wide but a run for a yard. No major push at the line. Next play, called WR jet sweep screen. Play designed for Hardman leading to a 8 yard gain. Goes heavy and gets first down. Two back set – rb screen to the outside as a corner fire blitz comes in untouched but completion for a few yards. Next play, Fromm keeps on the RPO to throuloe since all the linebackers suck in for the expected run play and again another blown block pick up leading to a free rusher to hit Fromm for a sack – announcers mention Holloman not going out potentially contributing to forcing Fromm to then attempt to scramble. Next play a screen play with a full blitz incoming and Swift drops the pass forcing a punting. Again further pressure on Fromm and missteps on blocking.

Offensive drive three:
Start drive in 1 rb, 2 te, 2 wr set, leads to good run blocking for 6-7 yards. Next play, same play appearance and it gets stuffed for a loss. Clean pocket and first down pass to Hardman. Run play for 3-4 yards. Next, pass with clean pocket leading to first down pass to Godwin. Fields comes in, first is a read option potentially as it’s a delayed handoff but all eyes are on the rb, if he pulled it likely more yards than one. Subbed out Fields for Fromm. Another read potential play that Fromm hands off to the RB, the oline and Swift get it to a first down. Fumbled snap saved by illegal procedure penalty – whistle perhaps disrupted focus but unlikely. Next play, five blitzers, right tackle beaten bad and a free blitzers down mid to allow a blind side strip sack, all wr in screen covered tho 9 about to get open down middle. Field goal forced. Again, no help for Fromm from the OLine.

Offensive drive 4:
Start off in the 2 wr, 2 te, 1 rb set again. All run defense expected and ran still for a 4 yard gain to the outside. 4 wide set with 1 rb, clean pocket and first down pass to Holloman in the corner hole in the three man zones. Next play, clean pocket and Fromm over throws a streaking Godwin between the LB and CB. Next play, blitz gets through the line from the tackle position forcing Jake to release it, near resulting in a pick. No open WRs on the play as only three went out for routes and RB and te stayed to block. Next play, pass, again more pressure into Fromms face and he heaves it up to Holloman who has slowed up on his route, missing the pass. Would have likely been a TD or first down. Punt forced. Miscues from Fromm, WR and Oline.

Offensive drive 5:
Fields gets the nod at QB. RB hand off for a good amount of yards. Likely Tenn weary of fields running. Flipped the play, gets the first down. Defense again watching Fields and that hesitation allows more running. Next play, Fields on the designed roll out to neutralize pass rush and passes it to Ridley on the out route. Next play QB keep on the read. Taking advantage of the same play Georgia has been running all day (credit to Chaney and Fields on that). Another run play as Swift explodes into the secondary. Defense is softening up in watching Fields expecting a potential run from him – however illegal formation. Fields drops back to pass, Stanley backs up out of bounds prior to catching it. Correct decision but thrown late. Four wide set next with an RB, flipped the play and Herrien gets a big gain. Next play is a free play due to offsides penalty. Fields underthrows the receiver while facing pressure from two blitzers. Fromm back in and they try to run it to the outside. It was stopped short. 4th down play, outside sweep to Herrien for the first down. Great play call as defense expected inside run and good blocking to the outside. Pass play to the outside, first down with clean pocket as the RB picks up the unblocked rusher, best pass option as others were fairly well covered. Bootleg pass to Holloman follows. Could have passed to a wide open Nauta in the end zone but would be rather tough throwing across body to the end zone to be fair. Wild cat run, holyfield could have scored if not for the fumbled snap. Pitch toss to the outside using 2 wrs and te to clear a running lane resulting in a touchdown.