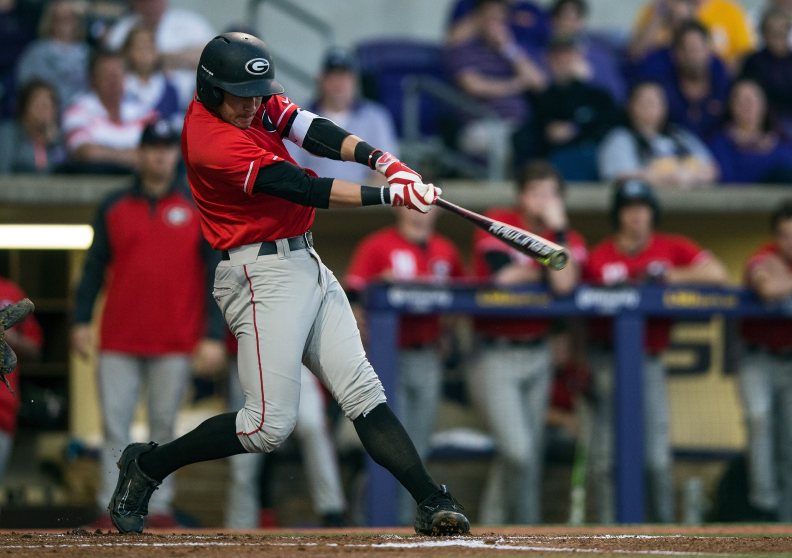 HOOVER, Alabama —  Who knew a no-hitter into the 7th inning for Texas A&M would result in a second round loss against Georgia.

In the first game of the 2019 SEC Tournament for the Dawgs, they sent out Tim Elliott to face Texas A&M’s Chris Weber. Weber came out and continued his great freshman year, with an outing for the record books. With A&M and UGA, the top 2 pitching staffs in the SEC, neither offense could get anything going. UGA’s Elliott fell into some trouble early and often, as he gave up hits to the lead-off batter in three consecutive innings and allowed A&M to get base runners in scoring position all afternoon. Luckily for him, he was able to execute the needed pitches and rely on his stellar defense that refused to allow A&M to score.

Elliott worked 5.1 innings and helped keep the Dawgs in the game. With the bases loaded for A&M in the 6th, the Dawgs called upon Justin Glover. Glover was able to stay calm and caused a ground-ball that was turned for a double play to end the inning and keep the score 0-0.

Weber was able to deal for most of the game and work a no-hitter through 7.1 IP. Sadly for Weber, a single by Randon Jernigan ended his no-hit bid and sent him to the dugout. Both pitchers showed they belonged as they gave up a combined 3 hits and no runs through 7 innings. Weber (7.1 IP, 1H, 2 BB’s and 4K’s) Elliott (5.1 IP, 2H, 3BB’s and 4K’s)

In the eight, the Dawgs got their much needed single courtesy of Randon Jernigan off of Weber and the Aggies turned to Joseph Menefee. Menefee was able to get a fielder’s choice and a strike-out to shut down the Dawgs threat in the 8th. Georgia looked to their bullpen in the 8th and 9th innings and turned to Zac Kristofak to close out the game. With that being said, Zac set six up and six down while striking out one to give the Dawgs the 9th inning to make some magic.

In the bottom of the 9th, A&M kept Menefee on the mound but he wasn’t able to close out the game. A John Cable single through the left side (on a shift play) gave him a single and allowed Cam Shepherd to come to the plate. Shepherd was able to fight off a few good pitches but got a hanging breaking ball that he golfed to left field for a 2-run, walk off homer to give the Dawgs a 2-0 victory!

The Dawgs now in the winners bracket, will look ahead to the battle vs the winner of the Arkansas vs Ole Miss game (starting today at 1:50pm).

The winner will face UGA on Thursday at 5:30pm.

Game will be broadcasted on SECNetwork.