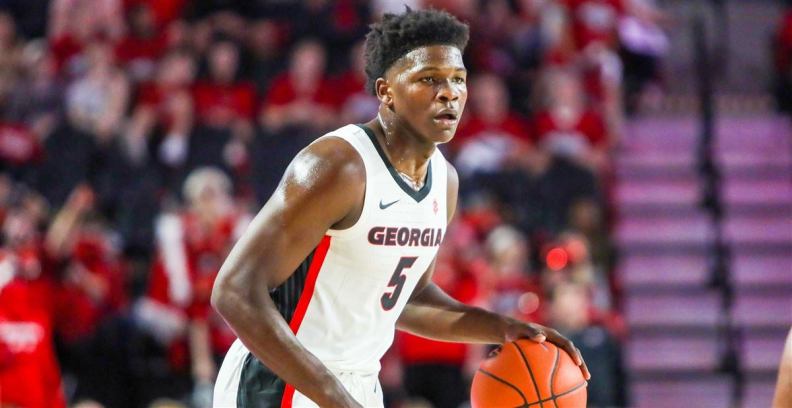 ATHENS, GA— The well anticipated debut for standout 2019 signee Anthony Edwards got underway on Tuesday night. Edwards, an Atlanta native and the top shooting guard in the 2019 class, committed to UGA on February 11th 2019 and ever since, the hype around UGA Basketball has grown. The first major commitment for newly hired Tom Crean made an immediate impact in the Dawgs 2019 Season Opener vs Western Carolina University. Edwards in his first half of college play put up some impressive numbers as he scored 12 points and 5 rebounds and followed it up with the exact same stats in the 2nd half! Led by his three point shot, he was able to connect on 4-7 from distance and help the Dawgs pull away in what looked to be a close game at halftime. (38-37 WCU leading)

After this game, there are a few things Edwards can work on with one being the missed layups. Anthony had an uncharacteristic 5 missed layups that really could’ve made his numbers look even more impressive. But nonetheless, this game didn’t mean as much as some further down the schedule.

Although Edwards looked to be everything advertised, fans and NBA scouts alike must keep in perspective that the Dawgs were playing an inferior opponent and were projected to win this game easily. With two months before SEC play, Edwards and company must begin to improve so that they can reach their goal of going deep into the postseason (something they haven’t been able to do in quite some time).

The second huge recruit under Tom Crean’s team had a breakout game in which everything was working for him…especially getting to the free throw line. Sahvir, a 4 star prospect out of Houston, Texas was originally signed to Texas A&M but was granted a release after the firing of their head coach and Crean wasted no time grabbing him up. Wheeler the #6 point guard in the 2019 class made his presence known on Tuesday night as he lead the team in free throw attempts and cashing in on them with a 7-8 from the line. Sahvir was able to connect on almost every shooting attempt on his way to a 19 point game while having 3 rebounds and 3 assists. With multiple players entering the Draft or graduating last year, the Dawgs look to make a name for themselves in the coming years behind these two future stars.

You can purchase tickets at:

Go support your Men’s Basketball as they begin their 2019-2020 campaign!